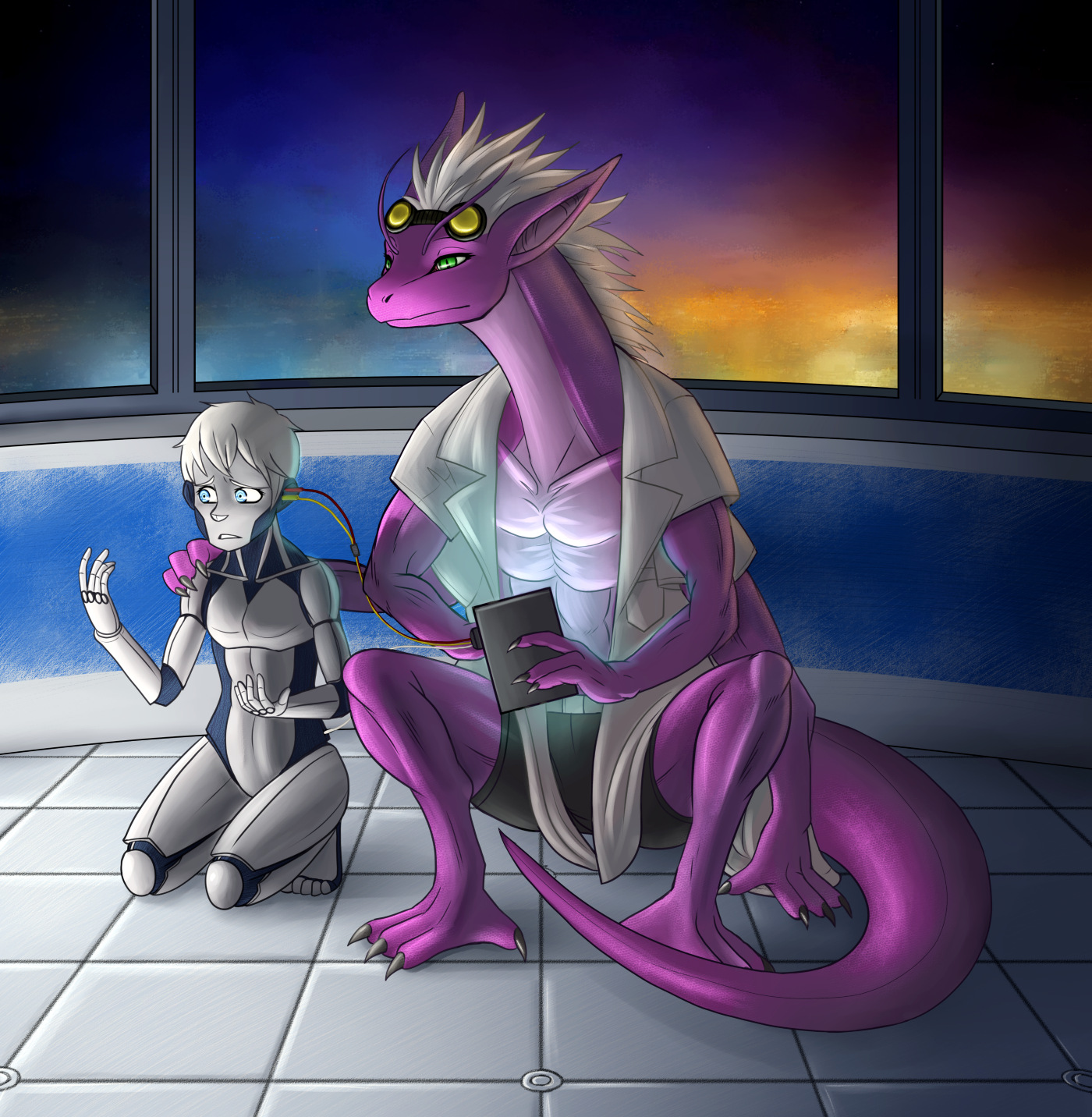 13 comments
First of all: If you like my stuff please check this out and let me know what you think.

2014 is the year AHS gets real, or it ostensibly will be, if the rest of the year isn’t as shitty as this month was for me.

Apart from all that stuff I talked about in the last update, my computer is now giving me trouble too…
That computer is roughly six years old, so I just decided to build a new one, while salvaging what I can from the old one.

The parts are currently in transit. Hopefully they won’t take too long to arrive and I’ll be able to have a stable system again.

Now, what’s this all about?
Because of aforementioned troubles… Have some filler: Comic idea #3! (Out of 7)

Imagine you’re just minding your own business and suddenly you’re a robot, also it’s 200 years in the future?

Back alley garage-sales of the future can be quite interesting. PA managed to acquire a cryogenically frozen brain and got right to work, trying to give whoever it belonged to a new life.

It turned out this brain wasn’t in good shape and the only way to get something out of it was to use Professor Awesome’s Patented Brain-shredder 5000, which liquefies the whole thing and uses the information it gathers to write an AI.

This AI was then uploaded to a robot-body of PA’s own design.
After she turned the robot on for the first time, PA found that this person wasn’t actually all that happy about this new life she had given her.

“It’s all wrong, everything is wrong!”
She still had her memories, memories of being human and what it was supposed to feel like.
Not only was her body completely alien to her, so were her own thoughts, she was an AI now after all.

There are tons of variables and settings you can tweak and modify with an AI, which is what PA is doing right now, trying to make her feel better.

Basically, a futuristic setting without a lot of the space faring or aliens, but people that modify their bodies in extreme ways. Like PA, a lizard-person and a bit of a mad scientist type, clearly not afraid to experiment on her own body.

I feel like this setting could make for some interesting stories.
Who knows, maybe after IFF.

I want to look over the Patreon site later this weekend when I have more time, but I do want to say this in general: I am all for supporting creators in a way that leaves them unconstrained by concerns about censorship. I want you to be able to draw and write what you want, without having to meet some idiot’s ultimately arbitrary standard.

I guess that arbitrary standard might be due to ‘American Puritanism’. Most Ad companies are based in the USA after all. :b

Personally I’m not a sci-fi fan, so I’d probably be sticking to AHS and IFF myself.
But that looks like an amazing series.

Might be pretty interesting. However, unless it’s some kind of intentionally retro design, it’s already possible to do a robot much more human looking than the one you’ve shown.
http://www.youtube.com/watch?v=eEzH40l-Dg8
Hopefully the whole anime schoolgirl thing will be dropped!

There are already robots that move better than the cosmetically nice one above. And there are other robots which are already run faster than people. Even very athletic people. That seems to be a recent development. Now if they could just get the noise down.

4 legs, and would that really be so bad?:

again with the shoving. Someone should give those engineers a little coffee:
http://youtu.be/3gi6Ohnp9x8

Pardon me for only showing two brands of robots. I’m not really an expert but I knew this stuff was out there and did a search. I’ve been involved with testing what you might call aerial robots (UAV’s). Much simpler problems, of course. But there’s nothing like when the robot has control of itself half the time, and I have control the other half of the time, and that control switches back and forth every second or so!

In the future we’ll have robots that will move and look very much like people. On the other hand, maybe the custom will become that robots don’t look like people. Could be interesting ethics about what’s appropriate for revived corpsicles.

Also could be interesting what things you can keep and what are lost when reviving corpsicles.

How long does it take to train the AI? How long if you can actually save the brain somehow? What are the civil rights issues?

What vulnerabilities do these creatures have that we don’t? And vice versa? Hand on a hot stove? Electric fields? What if they go to watch the giant van de Graaff show at the Museum of Science in Boston? Get too close to an MRI? Are they done as machines or as genetically programmed cells? Or something else? What’s the energy source? Do they need to breath?

Rather than not being human anymore, I would be more upset that probably everyone I know/ever knew is dead. Despite that fear, I love stories where the main character wakes up from suspended animation after many many years * _ *

So – let me get this straight.
Mina v3.0?
How many of your 7 comic ideas star Mina in some form or another?
Also, is it just me or has miss lizard gained a couple of limbs? Or did she already have those and I just missed them?

Maybe Mina is Drake’s equivalent of Keith Roberts’ Kaeti – same character, lots of different stories in all sorts of times and places.

Which is a nice way of saying that Mina is the Butt Monkey of Drake’s whole multiverse. :p

When you realize that Mina is not a character but Mina is you, then will you understand.