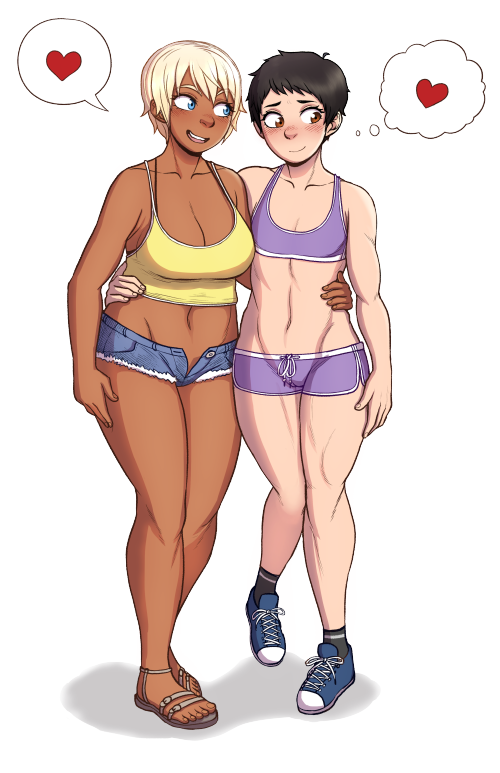 Alien Hand Syndrome is a comic following Mina, a young woman living a shut-in lifestyle, being possessed by a demonic spirit and having to deal with the consequences.

Mina is invited on a vacation by Erin, a rich girl who has a crush on her. Once there, Mina promptly breaks a mysterious stone and is possessed by the spirit that escaped. It fails to completely take over however, and only gets to assert control in short bursts, leading to embarrassing or even dangerous situations for Mina and Erin.

This spirit also has effects on Mina’s personality and it even starts altering her body.

Two exorcists worshiping Sol Invictus take notice of this, they see potential in someone who’s not fully possessed and make her an offer that will change her life forever.

Initially I had the characters, Mina and Erin, but I wasn’t so sure about the story. I knew I didn’t want to do just lesbian romance / slice of life, nor did I want to do a solely action oriented comic. It wasn’t until I watched a documentary about Alien Hand Syndrome, that an idea came to me.
What I eventually settled on is difficult to describe, but it’s safe to say that something like this comic is only possible thanks to the webcomic format. Independently funded, without publishers involved.

I’ve been wanting to make a comic for years, but for a long time I was too insecure about my art to start one. I’m a relative latecomer to drawing seriously, starting around the age of 20. Before that doodling during classes was pretty much the only art I did. Still, it helped me get somewhat good at it.

I started AHS with the goal of improving my art, but it quickly became much more than that.
By this point the scope of the comic has increased a lot, I fell in love with the characters, and it’s on the way to becoming my full time job, thanks to Patreon.