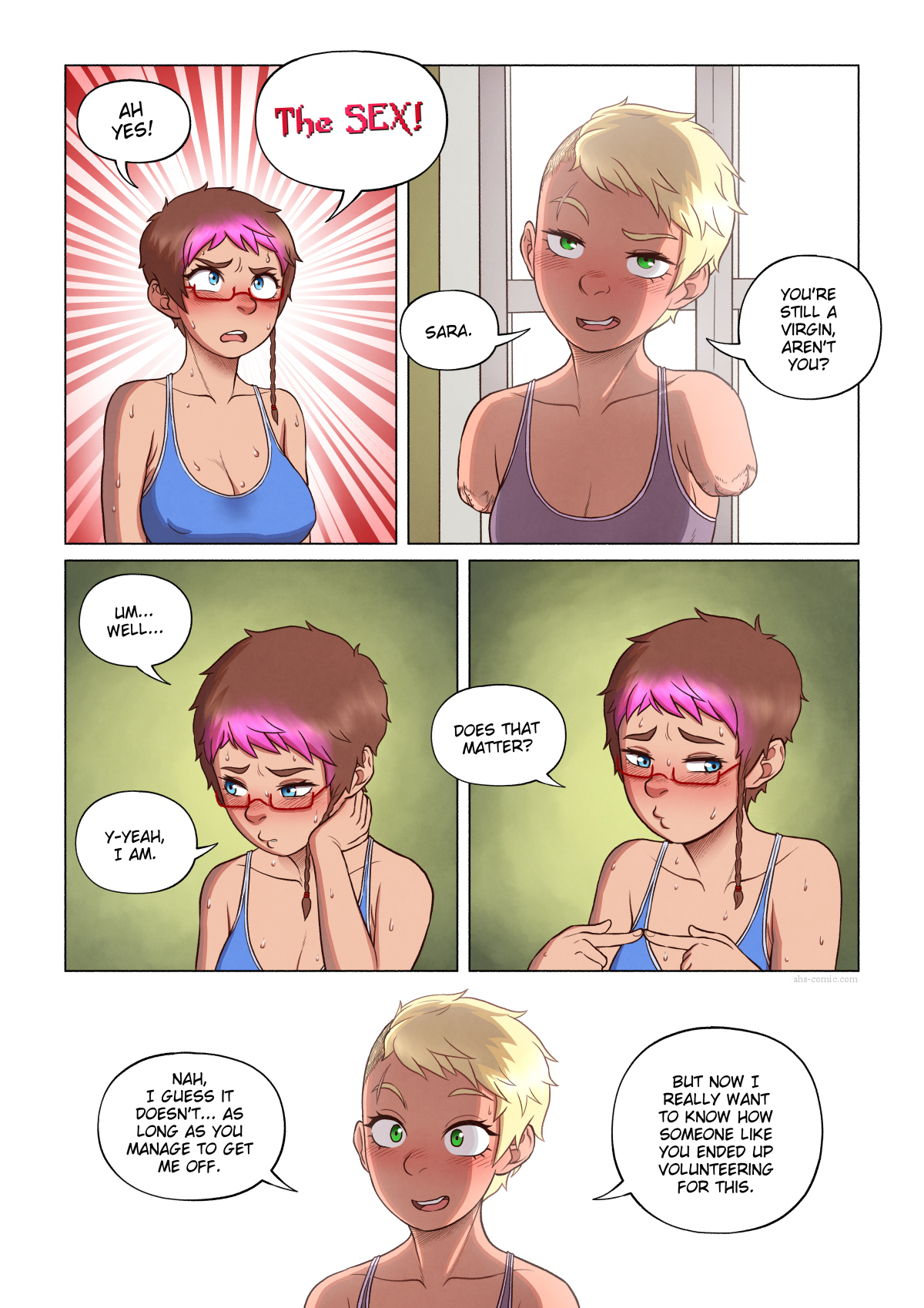 Ah yes, sex! I know of what you speak.

Might be the last color page of this one as well due to the shoulder injury, we’ll see.

Okay so I have a quick question for you guys.

How lewd do you think the comic will eventually become in the future? (If I actually manage to continue it that is.)

I’m just wondering where people think the story is going to go, because I’ve seen all kinds of differing views on this topic in the comments over the years.

Anyway yeah, just really interested in where people think this is going.

I’ve spent some time exploring the feasibility of maybe making a game. Because of my constant issues with my wrist and shoulder I thought it might be easier for me to tell the story I want to tell in this format.

However, as with everything I can already feel that I’m getting carried away once again, and in the end it would end up even more difficult. (Though still easier on my wrist.)

It would also be easier to collaborate on a game than it would be on a comic imo.

I started experimenting with the Godot engine and I can already say that I like it more than Gamemaker or Unity etc. It had proper 2D isometric support right out of the box which is my favorite 2D projection. (Though Unity recently surpassed Godot with it’s own 2D isometric tilemaps with height support for individual tiles.)
2D on the whole doesn’t feel like an afterthought in Godot like it does in Unity.

Then I experimented a bit with lighting and thought: “What if I made a 2D pixel art game with realistic lighting?” Now this is where the whole thing goes off the rails. Basically, to get realistic lighting with proper shadows you need 3D information and so I ended up looking at the 3D part of the Godot engine. Turns out pixel art is actually harder this way than more high res art would be, because ensuring one pixel equals one pixel with all that floating point math can get tricky. Especially with an isometric projection.

Looking good so far, but I achieved this by putting an invisible 3D mesh behind the sprite, if lit from different angles it would often cast shadows on the sprite itself, ruining the illusion. Then I tried putting it in the same spot as the sprite, this time with front face culling enabled, but since the mesh is not fully convex it creates a lot of artifacts.

I’m not very good at programming but the ultimate solution is probably to generate these meshes automatically from depth maps, then project the sprites and normals onto them with a shader, using world space, or screen space (not sure which) instead of tangent space. But I don’t know shaders at all so…

As you can see, my perfectionism is getting the better of me yet again. A regular old 2D game with less complex lighting would probably be good enough.

But it’s hard for me to resist this temptation, of trying to make things look even better.
And this is an issue I’m also facing with my comics.

A few months ago I talked about how I was in a mental hospital for a while and that right after I got out there was a fire in the House I lived in.

Now, I’m still dealing with the insurance to be able to replace my stuff, but some nice readers stepped up and donated money. Thanks to this, I was able to get the essentials already, like a new bed and some clothes. Otherwise I wouldn’t have been able to afford anything, because right before all this happened, I spent all of my savings to purchase a Dell Canvas pen display. I didn’t even get to really use it yet with all that’s been going on. Luckily it did survive the fire, because it has no vents for cooling or anything, so none of that corrosive smoke was able to get into it. Good thing I didn’t get that Wacom with it’s vents and cooling fan eh?

A lot of you sent me nice messages, donations, and someone sent me some of his old computer parts to get me back up and running. Some people also offered to help with the comic in a collaborative manner.

I haven’t responded to almost any of you and I’m sorry.

I guess you guys can tell by now that I got some mental problems. Dealing with other people in any way is difficult for me. For example: I spent more than two months drafting up just the one letter to the insurance company, most of that time I was sitting there panicking about nothing. Ideally I’d just live in the woods all by myself somewhere, because I’m really starting to realize that I’m not made for living in a society… but that’s not very realistic. So, when I don’t respond to your messages, this is why. It’s not that I haven’t read them, it’s that communicating with people is just super stressful for me.

Anyway, I’ll probably be able to move into my apartment again in a few weeks, there’s still some gaping holes there from the removal of burnt pipes and insulation that need to be filled in, but other than that it’s just about moving stuff back in and refurnishing.

After that I’ll be able to tell you what I have in mind for continuing AHS.

That’s all for now!