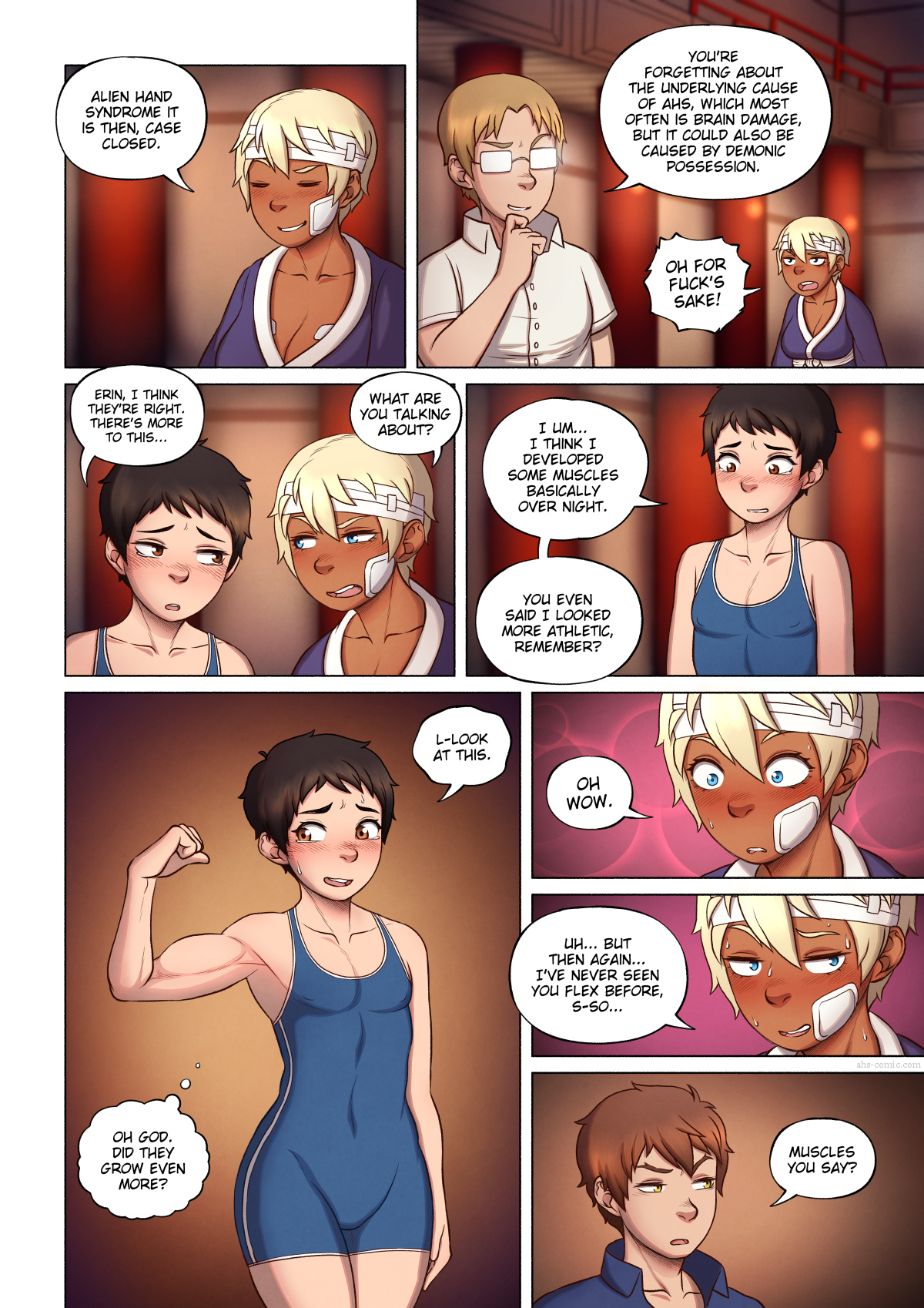 Oh how i wish you were able to update this more often, Well at least its not dead. Also you have any plans for the other comic in gallery? I wonder if that one is just on hold or if its over.

If you’re talking about IFF, yeah that’s dead. I had to give up on it because of health reasons.

Too bad, well as long as this one does not follow i’m happy.

And what about Growing Closer?

Working on a new page for that right now. I put it on hold for a bit due to a shoulder injury.

But it was great while it lasted!

Do you have links to your older comics?

IFF (whatever that stands for) and
Growing Closer

You can find most of that stuff in the gallery section of the site.
GC will probably get it’s own site at some point, but right now you can find that here: http://ahs-comic.com/gc/page-1/

hey, sorry if this seems insensitive, but how much longer is the next update gonna be? i’m honestly scared that this has gone dead. is your arm still hurt? how bad WAS it? how much better is it now?….sorry for pestering…but this has got to be one of the most DAMN heartstrings pulling web comics i have ever seen and i desperately want to see more.

Erin likes what she sees

And there’s now a page for every hour of the week!

I see Erin has similar issues with well toned women that I do ::::3

That’s a good fap-arm. The other one’s normal, though.

Not cap-arm – the ladies
Don’t bulk up in quite the same way we do, making the relaxed muscle car less evident.

Fap and Far, not cap and car (dratted autocorrect.)

The mystery deepens. I’m ruling out brain damage, and I am pretty sure the cause is not actually demonic.

(Hurrah, the wrist is at least holding up!!)

Yep, even flat girls can have a perky pair if they build up their pecs. Reminds me of the old isometric exercise and the 60s girl’s gym line going “We must, we must, we must improve our bust”.

I can’t remember her name, but in the late ’60s in Heidelberg, Miss Burch(?) had the girls in her gym classes singing,

To the tune of “Glow Little Glowworm”?

Erin’s Thoughts : “Mina can you take off the unitard and flex some more for me?”

one of the few disadvantages of dark skinned gals – not as fun to make them blush.

totally worth trying though.

If that’s happened in two days I’m pretty sure I’d let a demon possess me just for them gainz.

I’m not sure which guy is which, but the one in the last panel seems to think the muscles mean something , , , a clue to the identity of the demon, perhaps?

Ha Ha! I guess I’m the only reader who is actually interested in the plot.

Good point. I was thinking he was going kinda “that’s supposed to be muscles? I’ll show you mine…” But his expression makes more sense for some sort of “suspicious demonic activity that might tell me something detected” implication.

Muscle build up? Sounds suspicious. She better get completely naked and let the others examine her.

lol, the next time Mina and Erin are alone should be very interesting. also, i know you’ve still got the health issues and all, but when do you think you could possibly work on GC? just wondering, no pressure.

Dittos on the GC. I can see where this is going, but that doesn’t mean I won’t enjoy taking the trip.

the girl is just too gay she can’t handle this

This webcomic was sitting in my reading list for over a year and I’m very glad I finally got around to reading it.

There as so many jokes to make about gaining muscles on only one arm overnight !

Hey, just popping in to say I hope everything’s going alright. Hope your arm’s feeling a bit better. And if it is, be sure to take it easy all the same! Don’t want to overexert yourself and make things worse!

Omg it’s almost been a month. 🙁 The suspense is killing me. Your injury must be pretty bad, hope you get well soon.

Yeah, it’s not really getting any better either. Might require surgery.

Use your tongue to make them

Is there a way I can be notified when the next page is posted? Are there any other complete comics of yours that I could read?

Click “subscribe by email” in the top right.
No other comics, this is my first one. Possibly my last one too :u

I check my email less than I check this :/ You have serious talent.

Hey Drake, I wanted to share my experience. I’ve been severely ill for the last 8 years. Basically, I’d just exert myself a little and my entire skeleton would “re-center” around that area. So, like, pretty much all my bones got twisted up. My jaw, legs, arms, they would get locked in weird positions. This caused ulcers and extreme pain. But it wasn’t muscle tension – the muscles were all relaxed. Even more strangely, all my blood, urine, etc. tests came back perfectly normal. I had many MRIs and CAT scans but nothing was found; not in my head, not in my neck, not in my torso.

My doctors were perplexed and several of them said I was a hypochondriac. I thought I was just crazy and gave up trying to get help.

One day I was searching wikipedia, when a page popped up detailing an illness that seemed to fit my own: neurological ischemia, of all things. I’ve been through the motions a hundred times before, so I wasn’t expecting anything good to happen. But this diagnosis had an easy fix: 3000-5000mg D-Ribose daily. I tried 4500mg pills – though it comes in powder too. On the third day I felt a “burning” sensation in many of my joints, especially around the upper back and heart area. On the third week I coughed up a load of white/black/green stuff from my left lung (eww). By the second month I started having energy for the first time in years. Today (month 4) I’m able to move my back a little without popping a rib. Hopefully, the trend continues. I’ve not felt this good in nearly a decade.

I know you have a lot going on – but I want to see you healthy. And I can tell you definitely want to color and print your webcomics. So, why not give it a try? It’s probably cheaper than seeing a doctor, at least it is for me.

“Alien Hand Syndrome” is a great title and name-drop here for the comic, but coming from someone who experiences a real-world disorder that’s relevant here, it’s probably not the best call in a technical sense.

Dissociative Identity Disorder (“our” experience) is much closer to what she’s experiencing. That or OSDD (Other Specified Dissociative Disorder) which covers several symptom combinations including what could be considered “DID Lite” wherein alters (multiple concurrent personality states with distinct identities and wills) exist, but without the recurrent-amnesia component… or where the recurrent amnesia exists but only one personality state, or some less distinct personality states without unique identities (known as “facets”) exist.

Everything lines up behaviorally so far. Mina is coconscious (able to “copilot” and switch without discontinuity of memory or consciousness) with her new headmate but currently lacks any direct communication with them. Sometimes alters simply lurk in the background and work more on a subconscious level. Sometimes this involves lending a helping hand to the one currently in front through little whispers of their own reasoning and abstractions. It’s ALSO possible for headmates in the back to take over parts of the body and act without being noticed cognitively. We’re right back to AHS now, except that rather than being caused by neurological dysfunction, dissociation causes cognitive compartmentalization that allows one alter to “autopilot” the body without being noticed internally, and the one in front might feel that they’ve been possessed or remote-controlled… that the body isn’t theirs, or they aren’t part of it anymore.

If anyone reading this feels kinship with it, you’re not alone and you aren’t wrong, faking, hypochondriac, foolish, broken, or sinful. This is a real thing that real people experience. It isn’t rare, it isn’t bad, and the parts that hurt don’t have to break you. The amnesiac tendencies of DID aren’t as clean-cut as Hollywood flicks like “Split” (or as fantastical, though it can have physiological influence) and can be pretty low-key and get swept under the rug and ignored as just being “a bad memory.” The plurality components are a means to protect your mind, not a disease to be feared.