So, Patreon is this relatively new crowdfunding website. Think Kickstarter, but for content creators instead of projects.
A perpetual Kickstarter, if you will. Or a more direct form of donating.
It works like this: You support content creators by pledging a small amount of money (0.50$, 1$, 3$, etc.) per content update. In this case that would be every time I update AHS, whatever that’s worth to you.

Patrons can specify monthly spending limits, in case they’re worried someone suddenly uploads millions of pages all at once. It’s all based on goodwill!

Patrons would then receive exclusive rewards for pledging, depending on their pledge level, in a facebook-like timeline.
That’s one thing I’m still thinking about… What should those incentives / rewards be? Sketches? Wallpapers? Ebooks? What do you think?

Keep in mind that the main reason I want to do this is to be able to focus more on making the comic. Creating elaborate rewards will take time away from comic making…
Also, I don’t want to put anything important behind a paywall, and if I do, I still want to release it to everyone eventually.
Another big reason I want to do this: To be free of advertising.
Right now I got some PW ads running. I like them since they are pretty unobtrusive, but they don’t really bring in any money.
Eventually I would have to put Google ads on my site, or join a collective.
The problem with that is that they have pretty strict content guidelines.

Basically I would have to censor myself in order to join such a collective. There are places I want to take AHS (and possibly other comics I want to make) that advertisers will not agree with. Like nudity, violence, etc.

Now, I could tone it down…
But if this Patreon stuff works out I could just go: “I’m not beholden to advertisers! I can do whatever the fuck I want!”
Then I won’t have to compromise my ‘*+*~Artistic~Vision~*+*’
Lastly, what about the other comics I make?

Since Patreon is about funding the content creator, not a specific project, creating multiple Patreon pages wouldn’t make much sense.
Should I charge for each comic page I produce, whatever comic it may be? Or should I just keep it limited to AHS?

So, what do you guys think? Would you use Patreon? Would you only want to pay for AHS, or any comic I produce?
What would you like to see in terms of reward tiers?

This is what my preliminary Patreon page looks like right now: 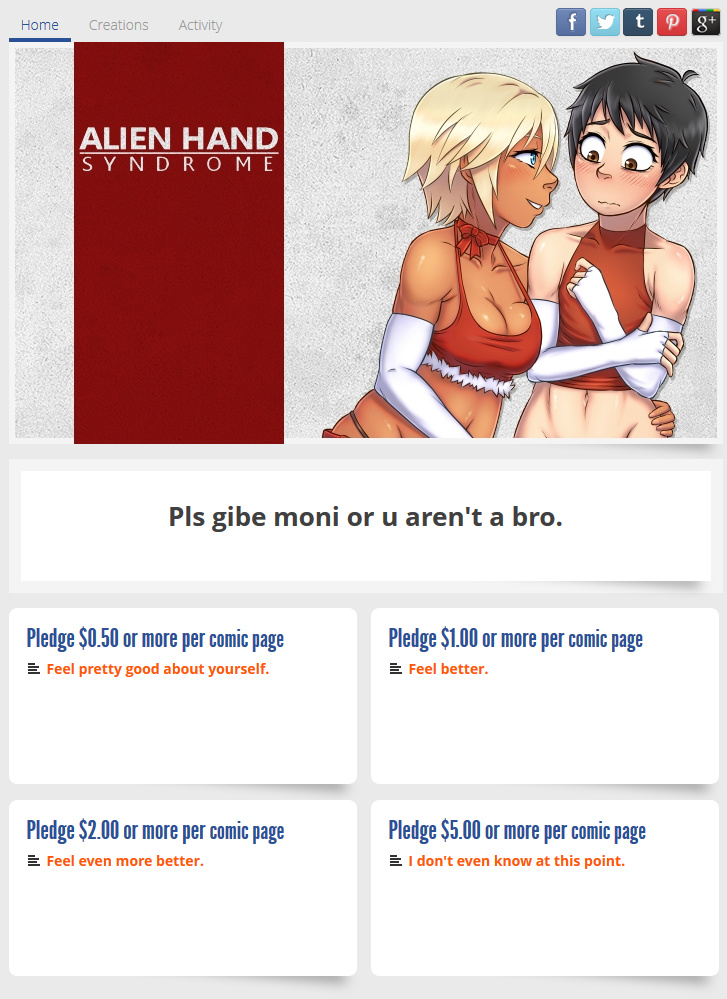 I don’t know guys… It might need more work.

Oh and just to be perfectly clear: AHS will remain free forever.
This is just a neat way to support the creator and get some small rewards for it!

Patreon sounds like a fair idea. I’m scared of Kickstarter but I don’t really care about getting anything back. You put enough of your effort into the FREE art I see no extra effort required to ask for money.

I guess so… But I do want to offer at least a little something.

Any opinions on the multiple comics thing? Or should I just focus on AHS?

AHS is just a part of your repertoire; I’d support the artist as the creator. Of course, some will prefer to help one comic over another… Perhaps support tiers for the different comics, and a Grand Prize (whatever that is) that includes more than one selected work? One thing I look for (as an unappreciative groundling) is consistency in art and improvement in style. You’re good.

But maybe I’m just a nouveau connoisseur: I’d rather have something digital I can view anywhere, not a DTF copy. If I had to choose a gift for a donation, buttons are a cool idea.

Personally really I like the idea behind Patreon, for the same reasons you outline above. It should offer creators an ongoing revenue stream, as opposed to Kickstarter’s project sprints, particularly creators who don’t sell merchandise.

I’ve been enjoying both AHS and IFF since I found them back in June, and I want to see where their stories go… I’ve decided to stop waiting for Paypal and signed up, so if you sign up a Patreon account then I’ll definitely back your comics with it.

I’m not terribly big on getting physical stuff for backing projects, though high-quality artwork like the wallpapers on your “Support Me” page are great. I particularly appreciate the square versions, since I have portrait-mode monitors on my rig.

yeah, i’d do it (and will once i get paid again :)) that way you CAN do what you want and how you want without having to compromise the look and feel of what you are creating – plus we can expect updates on a more regular basis as you can focus on it more 🙂

I would happily pay a monthly fee for AHS, but I don’t feel acquainted enough with your other works to put a price on them. Hope that helps! :S

Patreon seems like a good idea, I am already signed up to support half a dozen of the folk I follow. The steady micro-payments and monthly cap make it easier for me to budget (especially as I add more of my favorite authors).

It is a great idea, and anyone interested in your work will be happy to support you. Depending on the amount of donation you can have some different and attractive extras for your supporters which will be better than the free issues. Take a look at tubestart which is a CF platform for supporting youtube content to get some ideas, like monthly subscription, special editions, extra pages or maybe borrow from the film industry and offer alternative endings, you can have a supporter as a character in your comic etc.

Oof… Am I allowed to say I would donate if I can’t? I’d honestly love to support AHS especially if it’s in such a simple and affordable way; but… Still a minor here. I’m not even old enough to get a job yet, and even if I could do this thing out of my allowance, I don’t think I’m even old enough for paypal… ^^’

Still, though, I felt the urge to throw my opinion in there simply to add one more “I would” comment; since you seemed to be unsure whether people would even *want* to use this thing. ^^’

On another note, while I doubt anyone’s noticed, I have a very similar username to the person who commented on the “Yuri Christmas” page about having caught up with the comic. I am, in fact, the same person. I just fixed my username this time. (I don’t even know HOW it managed to get so mangled on that last comment. o_o)

I think that at least one of the reward tiers should be something along the lines of:

Every thing in the lower tiers plus a hard copy of each chapter sent out as they are completed.
These will be available for any one to purchase but you will get one in the first shipping paid for out of your pledges!

I know that if this becomes an option it will certainly be the tier that I shall back! 🙂

Just to make things clear I’ll be a backer any way, but would really like the above to be an option.