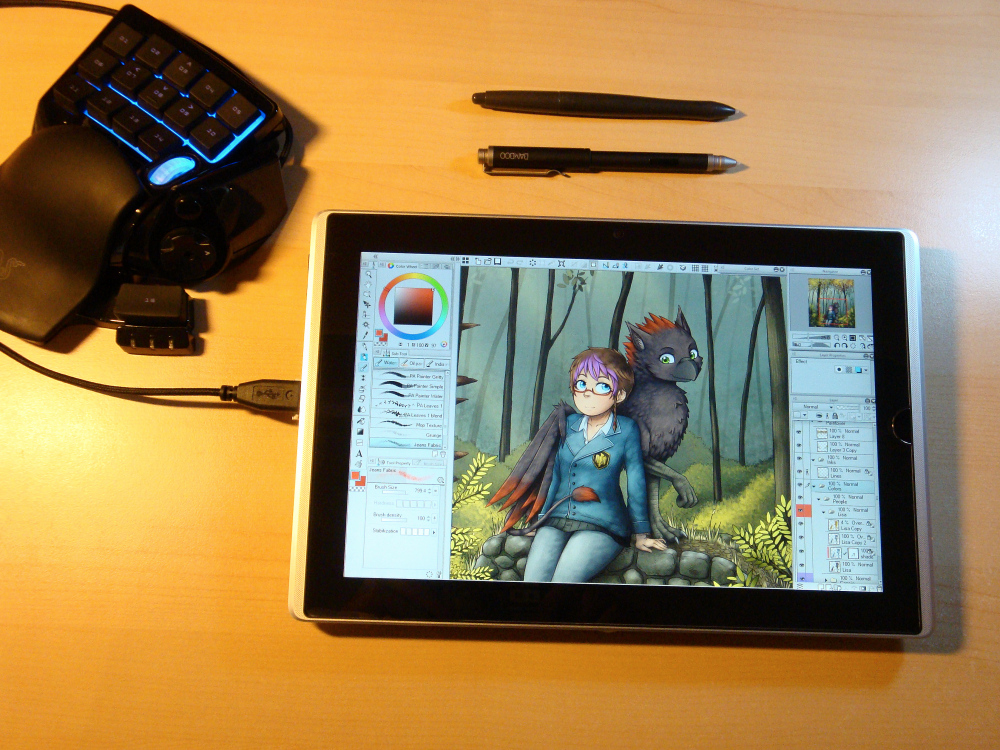 I bought the EP121 about a year ago. I got it for 400 bucks on ebay and it’s definitely been one of my best investments so far. It took some getting used to as I never really got into digital art before. AHS updated very slowly during that time and at one point I was considering going back to pen and paper. Then Manga Studio 5 came out and changed that. I loved this thing from that point on.
I’m still not updating the comic as fast as I did when working traditionally. I feel it’s because working digitally allows me to really obsess over every little detail, zoom, erase, undo, etc. A bit ironic, since I got into digital art to “streamline” the process…

The Nostromo may look a bit weird but I wouldn’t want to miss it for drawing. It could use a few more buttons though. Razer recently came out with a successor, the Orbweaver. I might get it one of these days.

The Bamboo stylus may seem like a strange choice, because it only has one (hard to press) side button and no eraser on the other side. The reason I bought it is accuracy. The cursor on the screen appears closer to the tip of the pen than any other pen I’ve tried.

The biggest problem with tablet itself is that it’s getting a bit dated. It was already old when I bought it.
It’s got 4gigs of ram, which is no longer enough for my needs and I can’t upgrade it. The processor is also a bit sluggish when it comes to complex Manga Studio brushes, but MS is partially at fault here too, I’m sure they could optimize the program more.

When that PC was causing issues I decided to upgrade, to hopefully do all the work on the new system and leave the anemic tablet behind.

The Parts
Case: Silverstone TJ-08B-EW (I went with a Micro-ATX case. Nice and small, but not too cramped either.)
CPU: Intel Core i7 4770k
CPU Cooler: Scythe Grand Kama Cross 2 (I wanted to try a down draft cooler, and it was only 35€.)
Mainboard: Asus Gryphon Z87 (C2) (Guess why I went with that one… Yeah… I’m stupid.)

Everything else was salvaged from my old PC.

Everyone knows Cintiqs are hella expensive, starting at about 1000$, but now there’s this! A cheap alternative at only 320€.
Spoiler alert: Sadly, it didn’t quite work out, I’ve been trying a whole week to make it work, but no dice. I’ll write up more about that soon.

The new PC is working flawlessly though, just with no way to draw on it. Here’s a few pictures I took while putting it together.

The motherboard tray of the TJ08b is removable, making assembly even easier.

Getting the cooler on there was a bit fiddly.

CPU heat-sink and GPU are a bit too close for comfort.

The drive cage had to be removed, it just didn’t fit with the USB3 cable connected…

Notice the foam beneath the HDD and that huge 180mm fan that comes with the case. Also some foam between GPU and CPU heat-sink… Just in case.

Some newbie cable management in the back! The back is also a good place to stuff SSDs.

Everything put together and working.

Finished build and I only took this crappy photo… That brushed aluminum is a fingerprint magnet.

This is the most silent PC I ever had, my monitor is actually louder! Even my desk lamp is louder if you can believe that. Although that might just mean I need a new lamp.

Now to find an affordable tablet monitor and start saving up for it.

In the meantime I’m going back to my trusty Asus EP121.

Its so beautiful. I think I will weep tears of pure nerd joy. I always think the flashing lights are a bit much but whats a cool new toy without bling, am I right? Rock on!

I love your mobile drawing and stationary drawing setups. I currently own a Samsung Galaxy Note 10.1 (2012 edition running Android 4.4) and run Clover Paint on it. Doesn’t hold a candle to GIMP or Krita unfortunately. I’ve tried using GfxTablet to connect the tablet to my computer wirelessly so that I can use it with GIMP or Krita but the Wi-Fi on it is flaky. Thanks for showing the setups as it gave me a few ideas on what I need to work on. Now as for your tablet issue…

I’ve been looking into some of these actually, among other things.

I’m a bit wary about Bosto though… Frenden’s review completely turned me off http://frenden.com/post/67995181942/bosto-kingtee-22hd-review

Sorry about that! I had only read about the Bosto review after leaving the comment. Why not take a look at the that Frenden reviewed? (http://frenden.com/post/69444810884/review-monoprice-19-tablet-monitor-wacom-take-heed) Probably the cheapest you can get without an IPS panel.

I have heard that the colors on the XP-Pen Artist 24 Pro https://www.xp-pen.com/product/602.html drawing tablet monitor 24″ are really good .

I work with photoshop, illustrator and coreldraw almost on a daily basis. I have been doing some photo editing and vector work with just a mouse and a XP-Pen Star G640 tablet. XP-Pen is really great, it has a good quality/prize ratio most of the time. I can’t wait to start using a pen tablet screen.