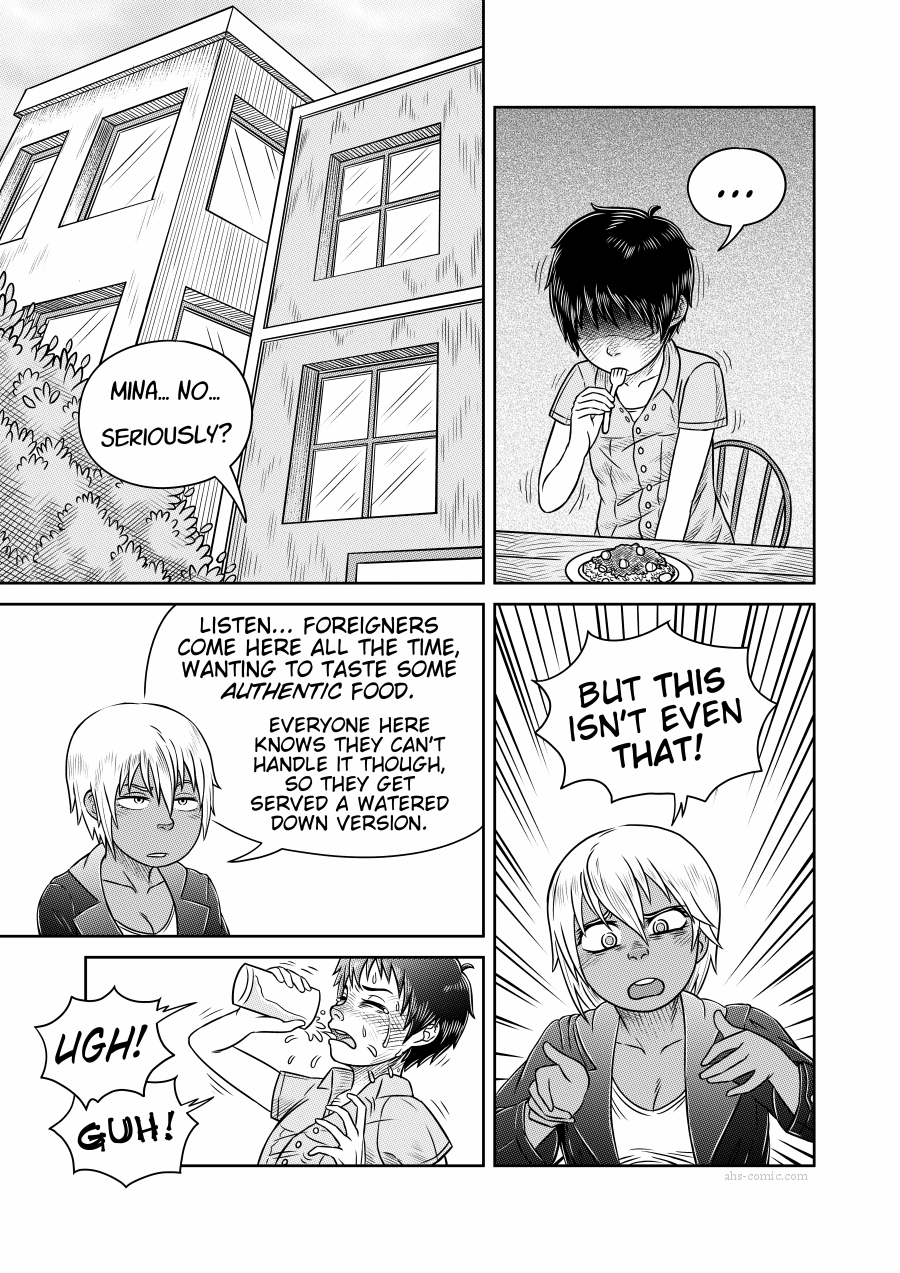 Spicy food? Never heard of it.

Is Mina just so nervous about the food that she’s getting some kind of psychosomatic reaction to it?

Looks like Erin’s going to need a lot of patience with her.

I would venture she’s so enamored with Mina that she’s willing to deal with Min’s issues because, from what I’ve gathered so far, she’s in love with her. That bein’ the case I’d say that she wants to spend as much time with her as possible, no matter what Min does. That’s just my observation.
JIM

….I have no idea what is going on.

Never saw someone getting some way spicier food than they’re accustomed to ? That’s what’s going on ! Though apparently Mina don’t need much spice at all to get in this state… if Erin is telling the truth of course, and not just taking her sweet revenge for Mina’s words.

Where is this mythical land with the dark-skinned fair-haired beauties and spicy food? I must go there…

let me know when you’re about go, i’ll start packing

Marzy…..it’d be an interestin’ place to visit, that’s for sure.
Hmmmm…..dark skinned blue-eyed blondes. Wow.
Have to drink some Starbucks Blonde Roast to celebrate that, eh? (but what do I know? I’m blond)
Maybe I’ll join you & Al for trip. Let me know your itinerary & I’ll update the ol’ passport.
JIM

Well, the only place I’ve met a natural dark-skinned blue-eyed blonde where the food was spicy was, of course, India. Courtesy of genes left behind from the Aryan invasion of India, blond hair and blue eyes show up *very* rarely. Briefly met a young woman (girl, really) in a poor rural village, and no doubt like everyone else she’d meet in her life, I did a double-take.

I doubt she particularly appreciated her genetic “gift”. I can imagine that it would make getting married very difficult. Small agrarian societies rarely appreciate ‘exotic’.

Mina must me from New England or something. It’s the land of unspicy.

Reminds me of a sketch about a bunch of people from India visiting a traditional British restaurant and asking for the blandest thing on the menu. It’s funny because it’s true.

New England is the land of unspicy? i, uh, must be residing in an alternate world version of it. Lots of spicy cuisines available from area restaurants and the grocers carry a broad range of spices and foods from around the world. It’s true that a lot of restaurant default dishes have the spices toned down a bit, but compared to what is (frequently not) available in most of the US that i’ve been to it’s hardly the land of unspicy. Although of course this is based on mostly being in the larger towns and cities of New England; i can’t really speak for most of the smaller towns. A lot of them have Japanese restaurants in addition to the usual Chinese and Mexican places, but Japanese food isn’t very spicy.

(Sorry about the food rantyness, but moving to New England has made it so much easier for me to find spicy food both at restaurants and at the grocer’s that i boggle at assertion that it’s the land of unspicy.)

Sudden thought: Uh, by New England did you mean the region in North America or is there a new addition to the British Isles? i only know the North American region.

Also, since this is my first comment here i just wanted to say i love the comic as well as (almost as much as?) spicy food. (^_^)

^Greater New England!^ I’m not saying you can’t find spicy food there, especially in some of the ethnic areas, but by and large I found that The Greater Detroit Area natives had no clue what spicy was and I find zero spicy in the traditional foods of the area.

I’m almost as bad as Mina, with the added bonus of being completely incapable of handling seafood.

Dear Neo; my wife can’t handle fishy stuff either along with coconuts….(they make her choke-why? I don’t know…I love coconuts).

Well, I shouldn’t say completely. I enjoy smoked salmon on occasion. But I do like coconut.
It all depends on your tastes. If you dislike something enough, and you have a high gag reflex (like myself), you can gag on food you find nasty. I almost threw up my first bite of lobster. >_>